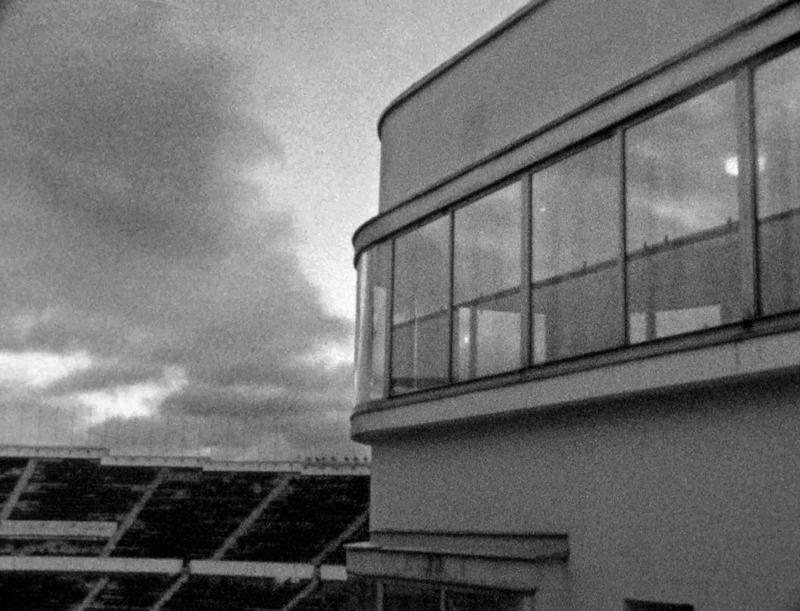 In Amplifier Saara Ekström explores the question of what remains and how we form a relationship to what history left behind. Ekström had a studio at the Helsinki Olympic Stadium office wing by the time the building was closed for major renovations. Surrounded by the weighty presence of the desolate building made her recognize its demand to be seen and documented. The title of the work refers to the empty sports arena as a monumental transmitter, amplifying the echoes of time resonating through the historical foundations into this very moment.

The Olympic Stadium in Helsinki was designed by Yrjö Lindegren and Toivo Jäntti and completed in 1938 with the intention to host the 1940 Summer Olympics, that were postponed to 1952. Now the building stands as a landmark for functionalist and puristic aspirations of a modernist utopia, which dramatically collapsed into chaos. In contrast to the impressive architecture, in Ekström's 8mm film a masked dancer (Heikki Vienola) explores the site with an improvised performance. The dancers movements are broken, fragile and even grotesque, inspired by Japanese Butoh dance. In taboo breaking Butoh the dancers transmute into other lifeforms, such as animals – neglecting the idea of a perfect and athletic human body. Similar associations connect to the dancer's mystical mask, which reminds of the face of an owl or even a parabolic antenna, communicating with messages emitting from the stadium itself.