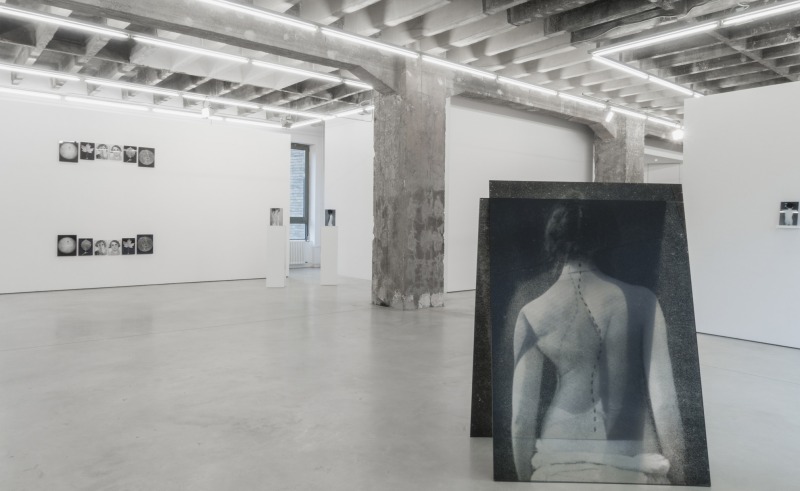 Milja Laurila – In Their Own Voice

Gallery Taik Persons proudly presents Milja Laurila’s most recent works in the solo exhibition In Their Own Voice raising the questions of the apparent transparency of our pictorial realm and the act of being looked at.

Who is looking and whom is the gaze being focused on? How do we look at a body, a child, a woman, a man, the world? Are we looking without seeing? We are observing, but the sight might penetrate its target, see distorted, drift away. Laurila questions if photographs have the ability to forget what they once were proof of. She asks, if images detached from their original context, still remain related to the original semantic field or transform into something else. Can an image of a young girl’s spine suffering from scoliosis transform without captions into a sculptural beauty?

A characteristic trait of Laurila’s work is using borrowed image material, in this case taken from old medical books. She is interested in how the concept of knowledge is constructed through images. The dialogue between a context and a photograph especially fascinates her – how it adjusts and directs our perception. According to Roland Barthes*, all photographs are defined by the reference; a photograph can never be totally excluded from what it presents. Barthes points out that a photograph has an inevitable relation to reality — hence also the power of being evidence. Laurila as well plays with the ability of a photograph to transmit the representation of reality. By detaching the images from their original context, the artist places them in a challenging position; she lets them speak on their own, in their own voice. Nevertheless a female’s bare curved hip stays the same, but depending on the knowledge or ignorance, our eyes perceive medical symptoms, imperfections, or the poetry of the human body.

Laurila’s interest towards pictures of patients stems from a personal experience, where she was observed through the eyes of science, turning her body into an object of research. "As I was standing naked in front of a doctor and her camera, I felt myself disappearing  — I was mere flesh and blood, not an individual with thoughts and feelings. Even though the doctor was photographing my body meticulously, it felt as if she was looking right through me — as if I wasn’t there.” The physical experiences described by Laurila can also be projected onto the images of the unknown patients. The viewer’s gaze meets the skin of the photographed, wanders along the arms, fondles the shoulders, but does not recognize a person or identity. The symbiosis between visual perception and tactile sense creates a captivating dissonance, the clinically photographed figures seem distant but the beholders can almost touch their skin with their eyes. In this light, the architect Juhani Pallasmaa* has stated that all the senses including vision are extensions of the tactile sense as factually eyes are skin during the fetal stage. According to Pallasmaa we can see with our skin, which functions as a border and simultaneously a connection of the external and inner world. Likewise in Laurila’s works the skin performs as a boundary surface of the gaze.

In many aspects, the bodily experience is present in Laurila’s works. The half-naked bodies are printed on transparent acrylic glass, which makes the figures translucent, almost weightless. The vitreous prints, which can be associated with the glass plates used in photography, work as a metaphor for the fragility of the portrayed subjects. The clear and hard material enables the figures to be formed through chiaroscuro as three-dimensional reflections on the walls. These soft shadows are bound to the movement of the viewer. Maurice Merleau-Ponty* discloses the idea that we don’t come to the artwork to look at it, but to see the world through it. This viewpoint is fulfilled in a poetic way when we encounter Laurila’s delicate human figures, who instead of representing the depicted individuals are actually reflecting our way of perceiving the world.

Milja Laurila was born in 1982 in Helsinki, Finland, where she lives and works today. After spending a study year at the Department of Imaging Arts and Sciences, Musashino Art University, Tokyo, in 2008, Laurila graduated from the Aalto University School of Arts, Design and Architecture in 2010, where she is currently pursuing her doctoral studies. Her most recent shows include Un problème féminin, Photographic Gallery Hippolyte, Helsinki, Finland (2016), Medicine in Art, MOCAK, Museum of Contemporary Art Krakow, Poland (2016), Magnetic Sleep, Photographic Centre Peri, Turku, Finland (2015), To remember - The Enigma of Memory, 2902 Gallery, Signapore (2013), Greatest of All is Love?, Wäinö Aaltonen Museum of Art, Turku, Finland (2013), Museum of Instability, Helsinki University Museum (2013), and A Room of One’s Own, together with Hannele Rantala, Finnish Museum of Photography, Helsinki (2011).
* Barthes Roland, Camera Lucida: Reflections on Photography, Hill and Wang: New York, 1981
* Pallasmaa, Juhani, The Eyes of the Skin. Architecture and the Senses. John Wiley: New York, 2005.
* Merleau-Ponty, Maurice, Phenomenology of perception. London: Routledge 24, 2005. (Original Phénoménologie de la perception, (Éditions Gallimard, in French, 1945)