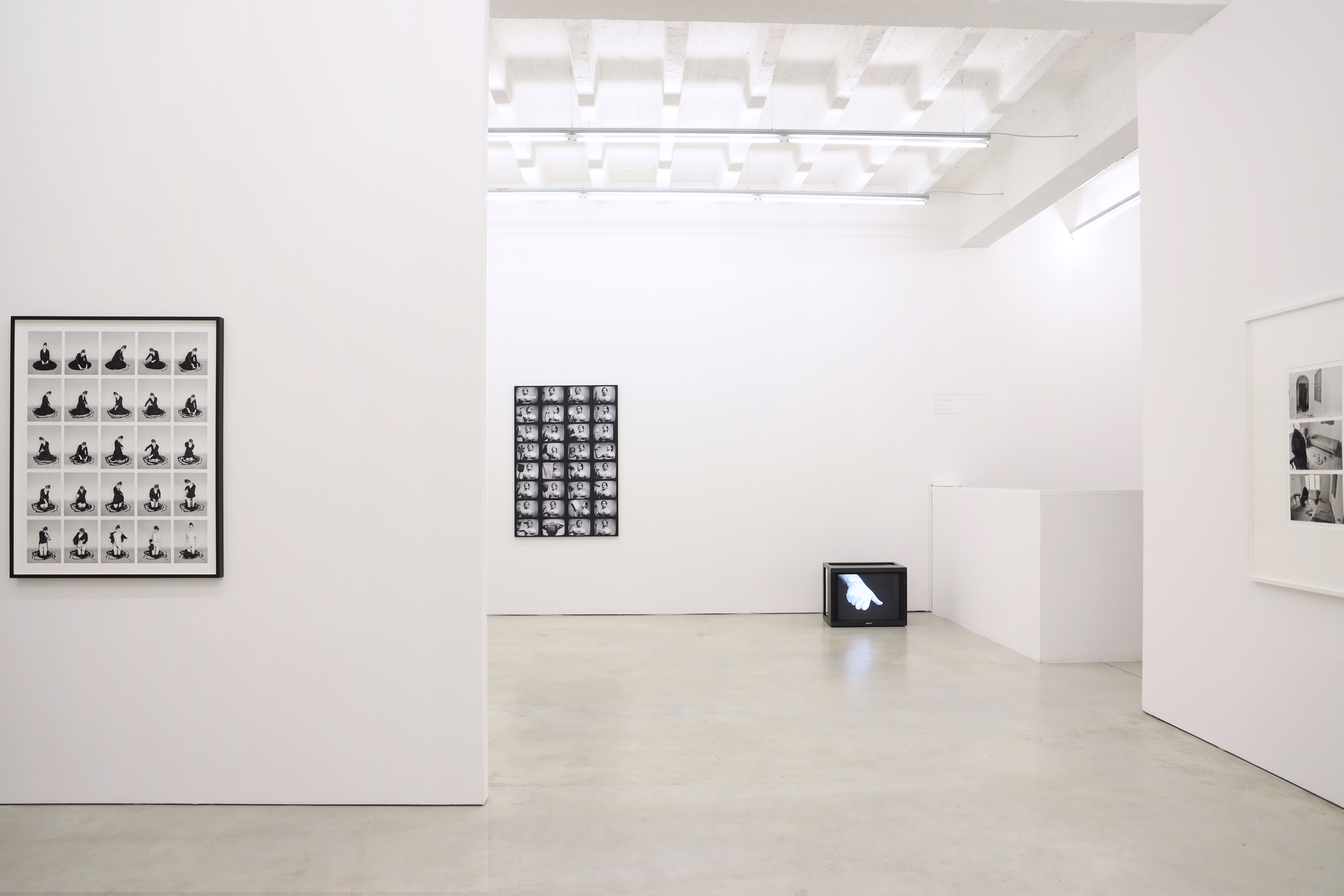 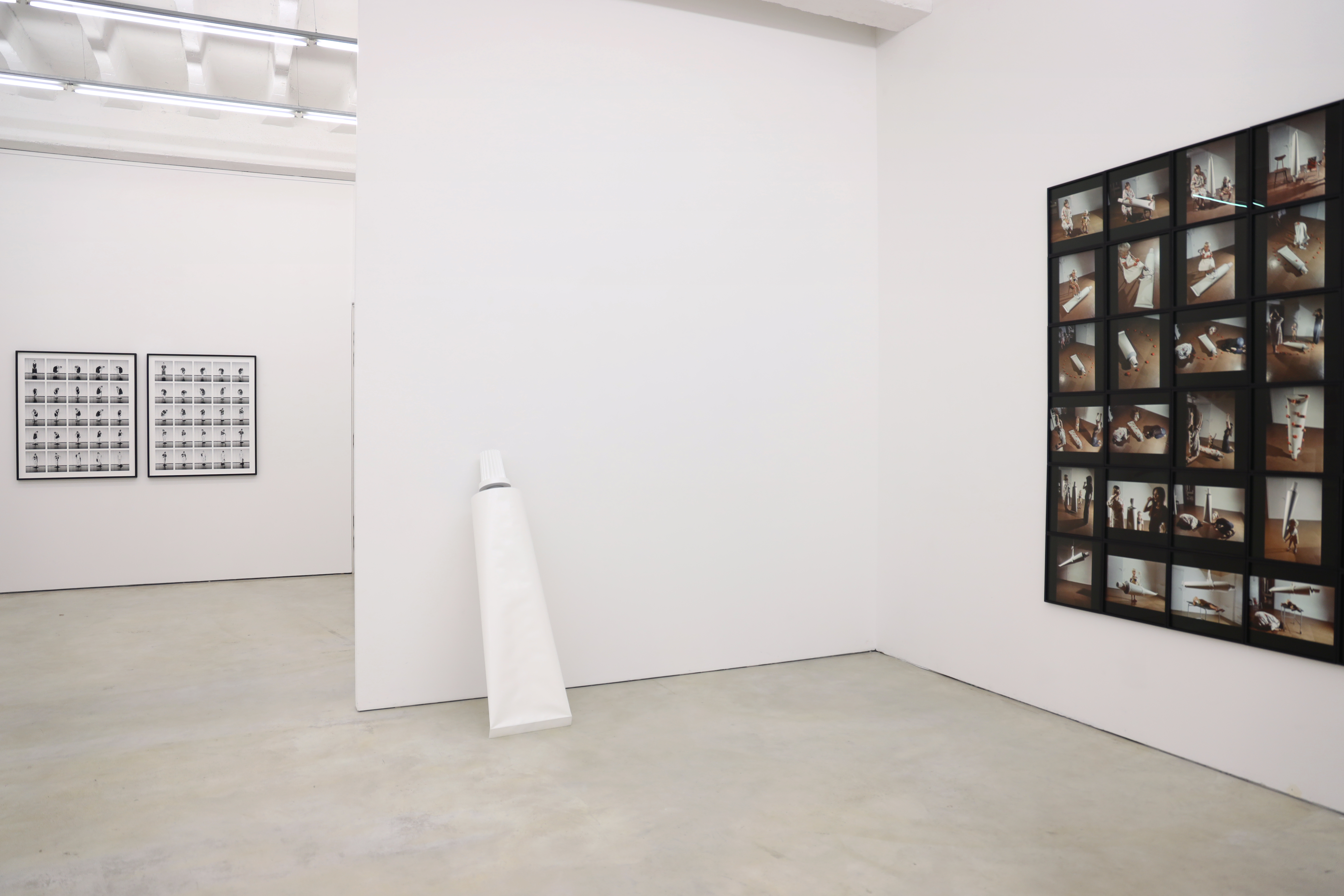 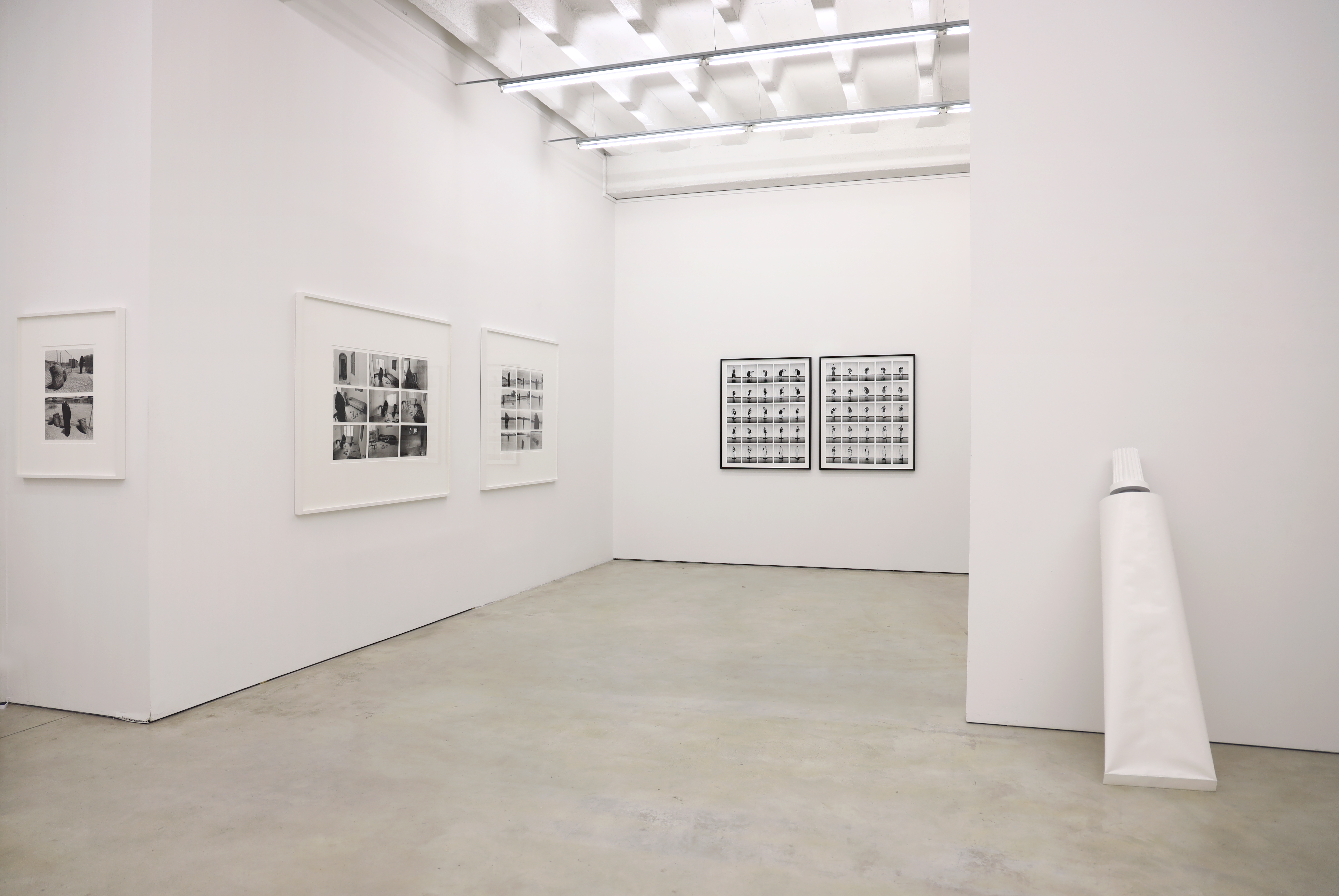 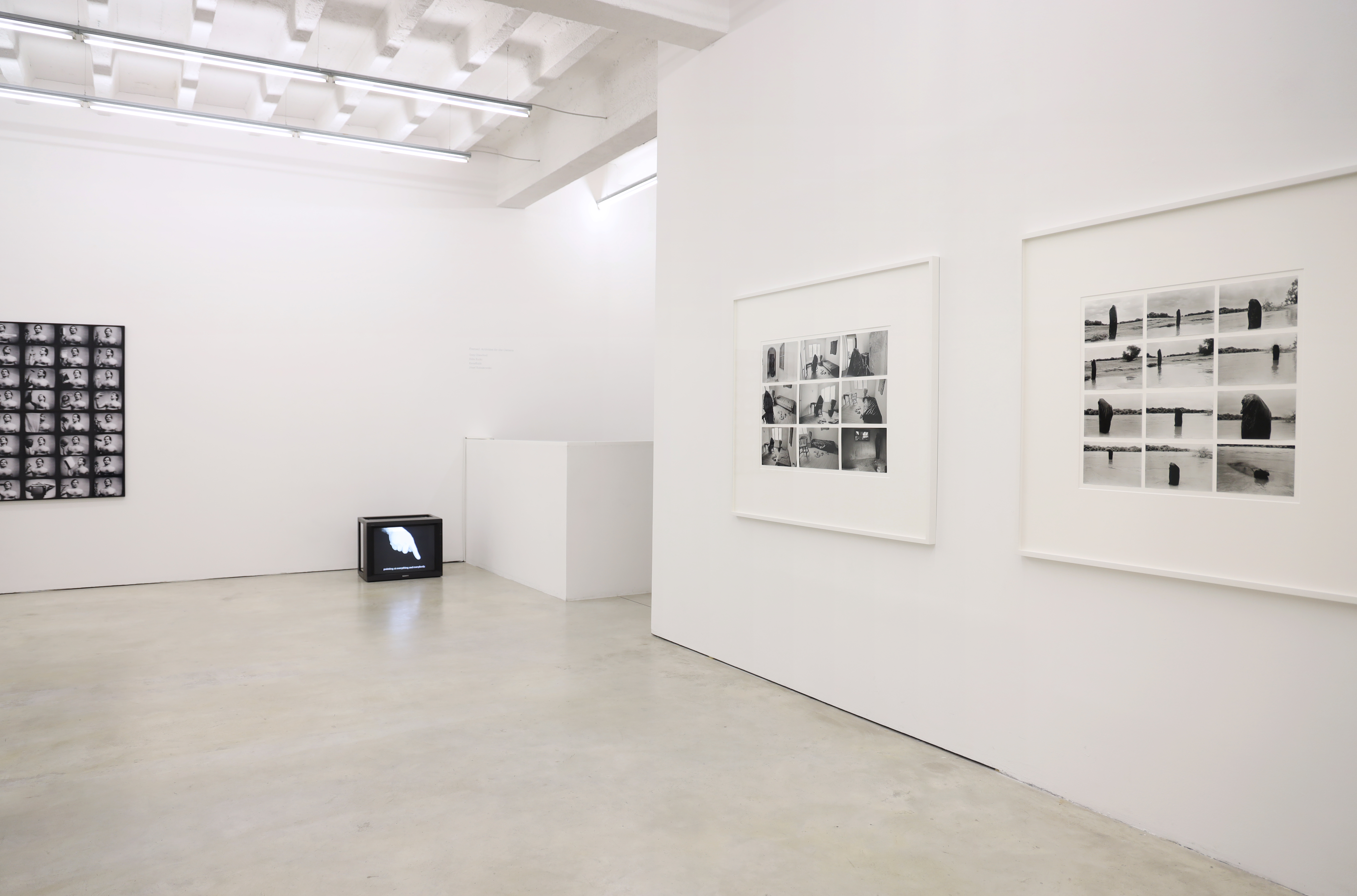 Framed. Activities for the Camera

Grey Crawford | Hilla Kurki | KwieKulik | Józef Robakowski
Opening: Friday, 29 October 2021, 5 – 8 pm
Exhibition: 29 October 2021 – 5 March 2022
Venue: Persons Projects, Lindenstr. 35, 10969 Berlin
Persons Projects proudly presents the group exhibition Framed. Activities for the Camera, focusing on the correlation between performance and photography.
Performance as an art form, beginning in the mid-20th century, has been used and developed by contemporary artists through their use of photography as their primary tool for recording their ideas and actions. Understandably, performance art needs photography to be able to last. Yet, photography plays an even more important role, not only as a means for the documentation but especially when the performance is staged solely for the camera. This exhibition presents a selection of artists who recorded their actions specifically for this reason.
Together, these selected works span more than 50 years and represent several geopolitical regions. They range from Grey Crawford's early 70s experiments in Southern California through the activities of the duo KwieKulik and Józef Robakowski in communist Poland, to Finnish artist Hilla Kurki's cut clothes photographs taken recently. All of these pieces share a conceptual context in how they use repetition and sequencing as their primary form for expression.
Each of these artists experimented with the camera to test the physical and psychological limits of their bodies. Their performances were staged and carefully planned as photographs or videos without any other autonomous events surrounding them. They are well aware of what Amelia Jones describes in her article "'Presence' in absentia" (1997) as performance's "dependence on documentation to attain symbolic status within the realm of culture"¹.

Grey Crawford’s (born 1951) early 1970s photographs Transfigurations (1973/74) encapsulating himself in full-body black plastic bags were created to capture his performance. It was a period especially in Southern California, where performance moved away from the platform of an audience and into the photographic framing of the moment. Crawford’s experimentations with this type of format incorporated locations ranging from the Mojave Desert to infamous ceramic slip installations of Douglas Humble in his own home. These activities were intertwined with his other photographic bodies of work yet with hindsight, open another chapter in the depth of Grey Crawford’s artistic career.

Photography as a creative tool found a receptive audience in Eastern Europe’s experimental art scene in the 1970s. Conceptual Art from that time helped elevate photography within the artistic community where sculpture and painting were held with higher esteem.
Józef Robakowski (born 1939) is one of the pioneering artists and experimental filmmakers associated with Poland's neo-avant-garde movement in the 1960s and 70s. In his works, he analyzes the language of the medium of photography and video and experiments with recording technologies. His artistic approach draws from the tradition of constructivism and Neo-Dadaism, recording the absurdity of the former communist reality in Poland. Art is Power! (1985), a series of multiplied nude portraits of the artist proudly displaying various objects such as a chicken, a hammer, or toilet paper alludes ironically to the representational portraits common in old masters, in which the social rank of the portrayed is sanctioned by the attributes that accompany them. The work depicts Robakowski as a vigorous socialist-realist work leader full of masculine prowess. In this year, Poland was politicly spiraling into a total collapse. This social reality set the tone for a new beginning for both political and social transformations. A continuation of this new manner of thinking is seen in Robakowski's work Fetish, done in 1986-87. The objects used in this piece also have a symbolic meaning for the artist and are part of his activities related to the theme of the artist's position and appropriation. This time, the objects are a collection of gifts mainly by other artists in a token of sympathy for the Exchange Gallery, which Robakowski had been running since 1978.

Most performing artists in Poland in the 1970s didn’t concern themselves with preserving their work. An extraordinary case contradicting that mentality was the duo KwieKulik, consisting of Zofia Kulik (born 1947) and Przemysław Kwiek (born 1945). They were especially aware of the documentation's role played in their performances and artistic activities. The filming and photographing of their activities helped establish this duo as one of the most innovative artists of their generation active between 1971-1987. Throughout this time, they produced countless performances captured on film and in photographs that were a political response to the rejection of their ideas by the communist regime and the Polish neo-avant-garde. Activities with a Tube (1975) belongs to a group of works based on a strong connection between art and life, grouped under the common title Making Money and Creating Art. The 42 photographs show a series of gestures directed toward a tube by KwieKulik’s family, such as bowing, saluting, shooting, and brushing teeth. It is a commentary characteristic of KwieKulik’s work, on social and political issues, as well as on the position of the artist in communist Poland.

A contemporary continuation of this 1970s performance-like tradition can be found in the works of the Finnish artist Hilla Kurki (born 1985). In her Phoenix series (2017) Kurki reflects upon the grief she embraces after the premature death of her sister. She transforms her sister's once borrowed black dresses into an emotional bridge to link us through to her memories in the hope for self-recovery. By cutting, sewing, and weaving, Kurki works through all her sister's collected garments to reshape her personal story and create a new narrative. This activity helps enable her to regain her authority in determining her own fate. She began referencing her family's legacy of rug-making, the cutting of clothes of the deceased to the weft. Both Ripples (2017) and the diptych titled Theatre of Memories (2021) show a solitary performance, where she cuts her sister's dress into a continuous thread while still wearing it. Kurki's photographs have a familiar feel to Yoko Ono's early cutting performances from the 1960s. They differ because there is no audience in Kurki's performances other than the presence of the camera.
________________________________
¹ Jones, Amelia: "'Presence' in absentia. Experiencing Performance as Documentation”, in: Art Journal, Vol. 56, Issue 4, p. 11-18, here p. 13, 1997.
Image: Hilla Kurki, Ripples, 2017, pigment print, 106 x 86,9 cm, courtesy: Persons Projects | Helsinki School
Supported by