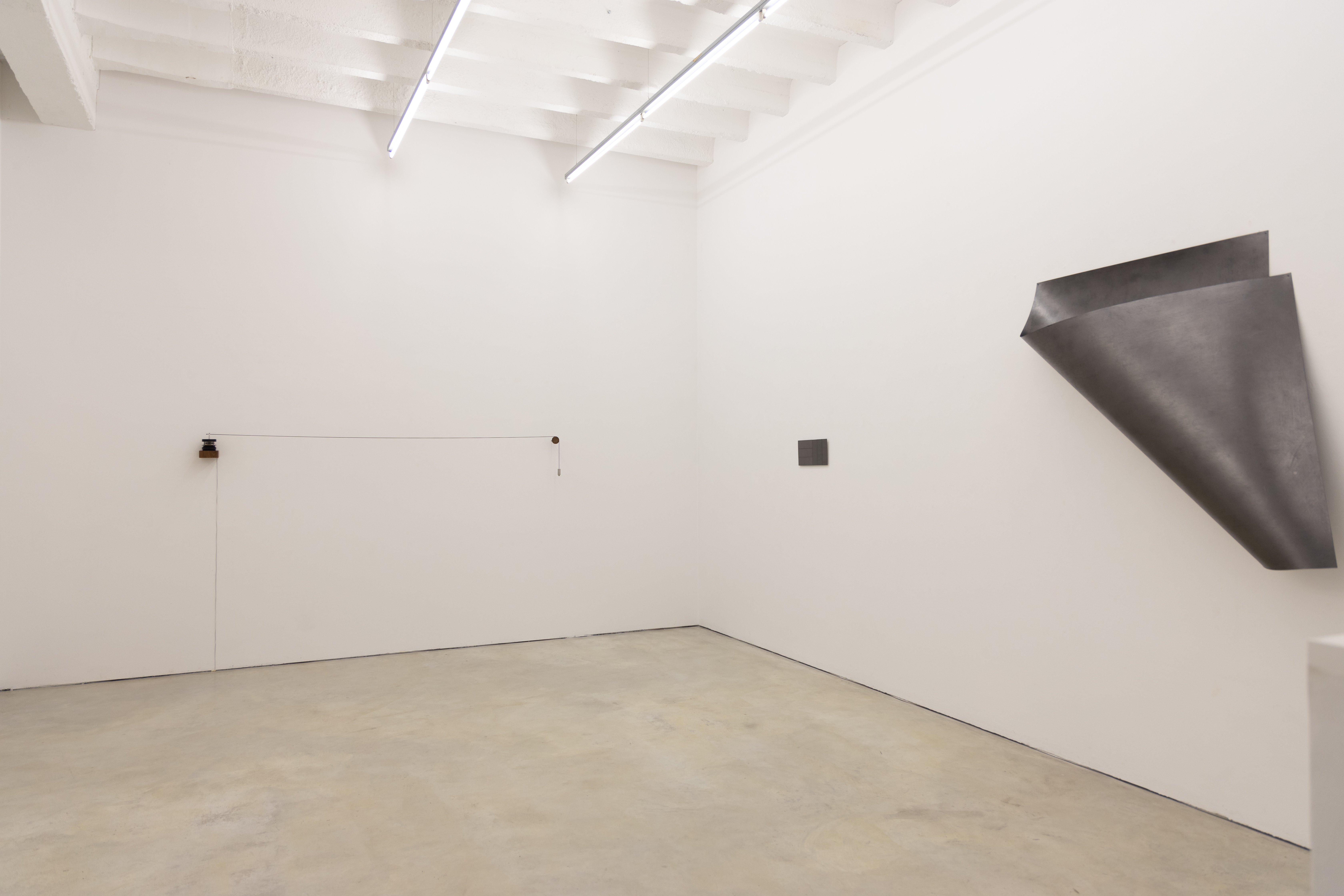 A Line Has Time in It – Revision

Kristján Gudmundsson | Niko Luoma | Jussi Nahkuri | Finnbogi Pétursson | Diogo Pimentão | Mikko Rikala | Józef Robakowski | Ragna Róbertsdóttir
Opening: Friday, 20 January 2023, 6 – 8 pm
Exhibition: 26 November 2022 – 25 February 2023
Venue: Persons Projects, Lindenstr 35, 10969 Berlin
Virtual Tour
David Hockney, once said, "drawing takes time, a line has time in it.” Inspired by this, Persons Projects is proud to present a group exhibition exploring the various approaches that shift the parameters of understanding what a line can be in the context of a drawing. These selected artists use a multitude of different materials as well as the passage of time to express their conceptual propositions in visualizing these linear representations.
Inspired by mathematics and geometry, Niko Luoma is an artist who uses traces of light to create time-based images on film negatives rather than making a typical drawing. It is no longer just an image, but a blueprint for Luoma's process of conceptual thinking. They form linear light abstractions pushing the limits to how much information one negative can absorb. This is seen with his piece, Convex Equation #1 (2010), in which every line that is seen is not due to a pencil marking, but due to light exposing the film. The work leaves the viewer with the sensation that the photograph is pulsating.

Jussi Nahkuri is another artist working with time conceptually rather than strictly documenting the world around him. His approach is inspired by the theories of French philosopher Henri Bergson, who is majorly known for his elaborations regarding the significance of immediate experience and intuition in order to understand time. Chance also contributes to Nahkuri’s art: For the piece Sending you Kisses under the Big Tree (2022), he took hundreds of photographs in intervals of 10 milliseconds; the differences between the photos were due to unpredictable and natural changes in the landscape. Nahkuri sees himself in a subordinate role, seemingly facilitating the final product – a working method that links him to artists such as Gerhard Richter or Jackson Pollock. The artist enjoys such abstraction; The pieces, which resemble the linear quality of a pencil drawing rather than a photo, are his own ‘secret language’ coded just for him.

The best way to describe Icelandic artist Finnbogi Pétursson’s process of working is to imagine what the center of the Earth might sound like: He creates a bridge between science and nature, examining the very essence of sound and silence through installations that utilize one substance to investigate the properties of another. He refers to himself as a visual artist interested in the behavior of sound, drawn to what he calls ‘the in between’– not necessarily the amplifier or the guitar, but what happens to the sound waves between the two, and how you can manipulate it. In Nodes (2019), thin metal straps rotate and create delicately vibrating drawings. The movement is caused by the rotating metallic apparatus, reminding the viewer of the visualization of sound itself. Pétursson’s ability to illustrate the intangible and invisible in his artworks has become his trademark.

Ragna Róbertsdóttir works with the concept of drawing in a unique method that touches upon the scientific. Her artworks project an overall tactile sensibility to the natural elements which come from her homeland, Iceland. The artist states, "I always have done it very simply. Often the story is in the material.” In her Saltscape series, Róbertsdóttir engages in a more elusive substance, the sea itself. Using various kinds of sea salts mixed in water, she creates her own studio laboratory by pouring the solution onto glass panes to activate the crystallization process through evaporation, engaging in not only a scientific practice but a truly original process of ‘drawing’ with the mixture. The salt residue adheres to the glass, forming its configuration either by chance or intentionally; The resulting time-reflecting image could easily pass as a photograph, drawing, or an X-ray of some obscure landscape from an unknown world.

Mikko Rikala is an artist who also focuses heavily on using our natural environment for his art, whether nature is the subject or the tool. His work is a reflection that merges mystical and philosophical thoughts through the empirical process of observation, as he explores the relativity of time, speed, distance, presence, and absence. His artwork 6 Movements in 6 Hours (2018) is a series done with stone and carbon paper. Rikala held the stone and ‘drew’ with it onto the paper six separate times, each drawing lasting 15 minutes longer than the last. This practice of what he calls 'meditative repetition’ has the power to juxtapose and break up relative movements of linear and circular time. Rikala’s artistic process incorporates the properties of chance as much as it emphasizes regimen. He preplanned this process of repeatedly drawing, however, the motions were improvised and the final result was unknown since the artist was unable to see his creation during the process of drawing.

Kristján Gudmundsson is the third exhibiting Icelandic artist and he combines minimalism with conceptual art. In a number of works over the years, he took a special interest in the basic equation of a drawing – namely graphite or pencil on paper. His artistic process clearly shows an understanding of the properties of the language of art, but it also shows how to ignore such rules. His works would be installed either on the wall or the floor; for instance, a large roll of paper next to a whole block of graphite, rather than pencil marks on paper. Or as seen in Drawing Nr. 17 (2005), multiple pieces of graphite mounted on aluminum. In the process, the artist completely disrupts one’s most basic assumptions about what constitutes a drawing.

In Diogo Pimentão’s work, everything is a potential drawing. This would include his performances, gestures, movements, or sound. Throughout his career, he has been attempting to stretch the conventions of what a drawing is by introducing the action into other dimensions. For him, this involves a quasi-choreographic relationship to his body, which determines the work’s scale—from the bits of paper mechanically folded by the hands to the large black monochrome pieces made with the whole body. The drawing is not the direct product of a decision, but the literal demonstration of a process of doing. His bent and folded paper sculptures, perfectly covered in graphite, force us to question the materiality of what it is we are looking at. These constructed forms can easily be mistaken for other materials such as concrete, metal, or stone.

If Pimentão conducts experiments with the medium of drawing, Józef Robakowski experiments with video. Rooted in the Polish avant-garde, Robakowski has used the line to explore the synchronicity of sound and image in his photography, films, and videos. An ordinary gesture — a line scratched on a frame of film, as seen in Idle Line (1992) — he sees as analytic, an element that visualizes time and motion, the most basic elements of cinematography. He often sees the course of the line as a kind of action that releases energy: "In 1976 I pursue it with a movie camera, but a moment later I also run, drive, jump... to obtain a filmic image of my biological vitality. By giving this absurd task to the camera I take away its original function.” Films and video work with the line thus not only exploring the typical psychophysical function of the image on the viewer but also attempting to give human attributes to the abstract image.
Click here, to see the Viewing Room.
Image: Niko Luoma, Symmetrium #1, 2009, C-Print mounted on acrylic, 170 x 140 cm.