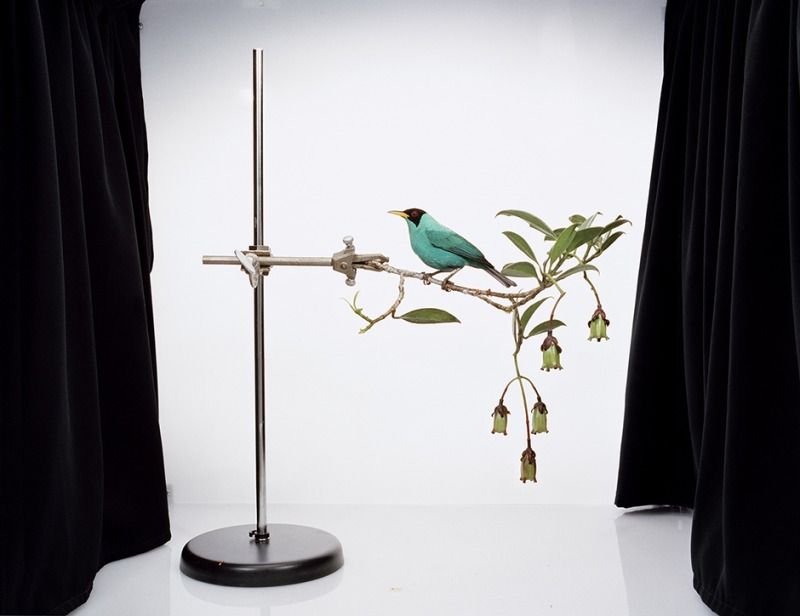 In relation to Kannisto´s first major monograph "Fieldwork", published 2011 by Aperture, the exhibition gives a broad overview of her oeuvre. Selected works from her series "Close Observer" (2008-2010) and "Field Studios" (2000-2010), including many of Kannisto´s most recent photographs, are presented in addition to works from her series "Act of Flying" (2006) as well as "Private Collection" (2003-2006). The exhibition opens in presence of the artist on Friday, 27th April, 2012.

In 1997 Kannisto started spending several months per year in field stations in the rainforests of Latin America, working alongside with biologists. Having always been interested in biology, natural history and the question of how science is trying to explain the world, Sanna Kannisto adopts methodological elements of scientific research to question its concept of how nature is approached. She amplifies her query by visually trespassing traditional portraiture of nature that usually depicts its objects isolated on white background. Through her concept of crossing both disciplines - science and art - Sanna Kannisto evolves a perspective that alerts to human´s sight of nature and its complexity.

Sanna Kannisto´s idea of ‘visual research´ leads her to approach the observed species in a way that eliminates all attempts to create objectivity. The settings for her "Field Studios" (2000-2010) do not devoid the subjects from a context but put them into mise en scène arrangements that adhere to specific references. When deciding to have both in the picture - the stage as well as the staged - Kannisto deconstructs ironically the claim of truth that is inherent to science as well as to photography.

The series "Act of Flying" (2006) shows a hummingbird with shiny, colourful plumage, being photographed in flight. The motion of the bird is captured against a white background in individual images. Nevertheless, it is not a study of a hummingbird´s flight or movement as it was in Eardward Muybridge´s case in "Animal Locomotion" (1887), but it is a sensitive aesthetical survey of the moment that evolved through the encounter of the observing artist and her object.

Kannisto´s research of how nature is portrayed and represented in the context of art and science results into the conclusion that "it´s more about trying to research human ways of seeing and working than claiming to make research on nature". Continuative she explains that it is "the selection of viewpoint in relation to what is looked at that decides on the result that is presented as truth". Particularly this notion is evident in Kannisto´s work "Close Observer" (2010). It reflects the interdependence of the observing subject and the object of observation and adverts with a humorous wink to the paradoxic concept of capturing reality.